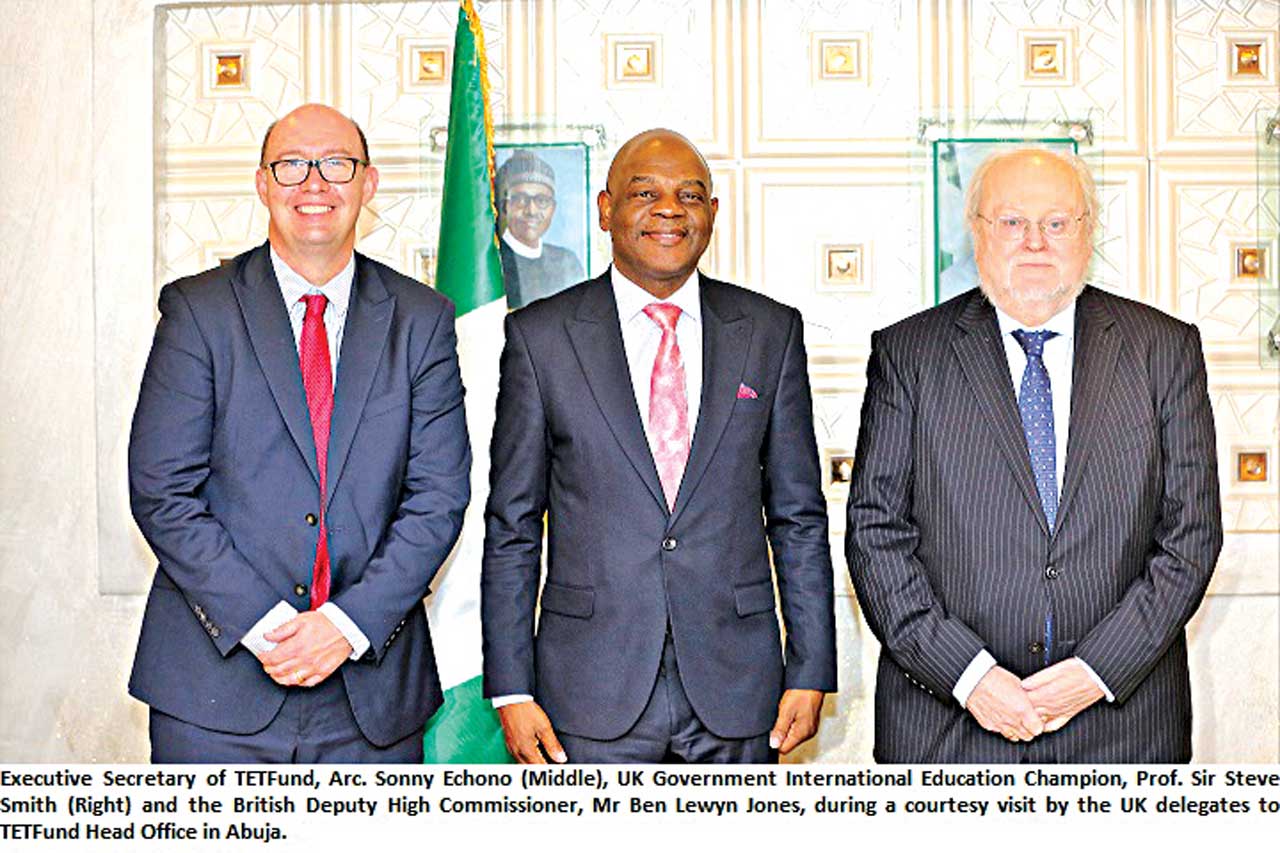 When news of the appointment of architect Sonny ST Echono as Executive Secretary of the Tertiary Education Trust Fund (TETFund) leaked into the media space, it was met with charming comments from many quarters.

This was expected given his track record; having retired as Permanent Secretary of the Federal Ministry of Education shortly before his appointment. Beyond that, he served as the ministry’s representative on the TETFund board for four years. Accomplished technocrat and embodiment of knowledge in several fields, Arc. Echono brings to this role a broad and diverse experience in infrastructure development, public administration and procurement management. The others are information and communication technology (ICT) and education.

Upon taking office, the Executive Secretary took the lead after declaring his determination at his first press conference not only to follow the path of his predecessor, Professor Suleiman Elias Bogoro, but also to improve on his achievements.

The smooth passing of the baton from Professor Bogoro to Arc. Echono was unprecedented in the Fund’s history. It was an exciting moment for both at the handover ceremony attended by the Fund’s management and staff as well as staff from the Federal Department of Education.

In his first press conference, the Executive Secretary outlined the new policy changes needed to bring the TETFund into a new era of excellence through curriculum review, entrepreneurship studies, information technology and communication (ICT) as well as research and development.

“It is because the Nigerian curriculum system is theory driven and does not meet industry requirements. As such, graduates joining the labor market generally need additional training and retraining to adapt to their roles,” ES said.

He added that more funds would be allocated to building the capacity of lecturers to equip them with the skills required for entrepreneurial studies and research studies in digital technologies to prepare Nigerian students for global competitiveness with the ultimate goal of build a knowledge economy and increase the country’s global presence.

“We have been so successful in physical infrastructure, and we will continue to do so, but we also need to focus on those to whom we have entrusted the assessment of our students. We need to focus on the type of curriculum being taught and delivery systems,” he added.

The Executive Secretary receives an award.

Since taking office at the Fund, Echono has spearheaded numerous initiatives, activities and partnerships inside and outside the country’s shores, projecting the Fund globally.

It should be noted that Arc Echono has initiated a series of partnerships with notable institutions locally and internationally, including the University of Brazil, Vicosa, for the training of more Nigerian professionals in the field of agriculture, transnational cooperation with the British government, the Forum for Agricultural Research in Africa (FARA), the Nigerian Economic Summit Group (NESG) as well as the African Union (AU).

Other notable achievements include signing a Memorandum of Association (MoU) with the University of Sussex for the development of higher education in Nigeria and partnership with the European Union (EU) on research, development and innovation in Brussels, among others. All of these, he said, are aimed at articulating new strategies to strengthen the government’s existing efforts to improve the level of education in Nigeria.

The TETFund boss also made history as he recently received the first and most prestigious Medal of Honor from the Forum for Agricultural Research in Africa (FARA) in recognition of his outstanding support and vision for the implementation of the African Union Agricultural Research and Development Plan for Nigeria.

The brief but solemn ceremony took place in Accra, Ghana, during the Extraordinary Meeting of the Steering Committee of the Agricultural Research and Innovation Fellowship for Africa (ARIFA).

Presenting him with the award on behalf of FARA Board Chairman Dr. Alioune Fall, Executive Director of FARA, Dr. Yemi Akinbamijo praised Arc Echono, describing him as “an architect by training and a well-established agribusiness entrepreneur. , who comes to his current position with strong distinctions and solid footprints in the agricultural sector.

Addition: As former Permanent Secretary of the Federal Ministry of Agriculture, Arc Echono has demonstrated commendable support for FARA’s efforts as a capacity development cluster with accelerated vigor.

The intervention activities of the year 2022 kicked off with the distribution of award letters to the 244 beneficiary institutions across the country, with each university receiving a total sum of N642, 848, 138.00. Meanwhile, the sum of N396,780,086.00 went to each Polytechnic while each College of Education received the sum of N447,758,804.00 according to the ratio of 2:1:1 stipulated by the operational mandate of the TETFund.

Distribute the Award Letters at a Strategic Interactive Session for Heads of TETFund Beneficiary Institutions held at the National Universities Commission (NUC), Abuja; the Executive Secretary announced the Fund’s commitment to reviewing some of the policies that are causing delays in project implementation.

In a drastic move to restore sanity, protect the academic integrity of educational institutions and academia, Echono has formed a Digitization Project Steering and Coordinating Committee with a mandate to create a national research bank to serve as a repository for academic work.

Without a doubt, Arc. Echono’s 100 days in office witnessed sincere and exemplary leadership aimed at repositioning the Fund for better service delivery aimed at the development and global competitiveness of our higher education institutions and, ultimately, the overall development of the country.

Interestingly, Echono’s giant leap since taking office is not visible only to TETFund staff and management, or perhaps relevant stakeholders in academia, but to all who care interest of the country’s higher education sector.

In one of the many articles to project his commitment to duty, it was revealed that Echono, without delay, embarked on a total and unhindered reform which is already bearing fruit. Some of these reforms include the attempt to curb reckless spending, financial leakage, continued waste of public funds as well as spurious programs that have had no positive impact on the Fund or higher education institutions across the country. .

According to reports, reviewing government procurement to align it with global best practices also yields the desired results. It has been revealed that all sorts of cutting edge practices such as contract splitting and job padding have been nipped in the bud. This implies that issues such as task execution and proxy delivery have finally been resolved, while due process in task execution has been restored to restore common sense in the system.

It was also revealed that he championed the agency’s ongoing workforce reorientation through seminars and workshops to familiarize workers with the new practice. According to him, this will discourage the continued deployment of any unethical practices that contrast with the new development of the agency.