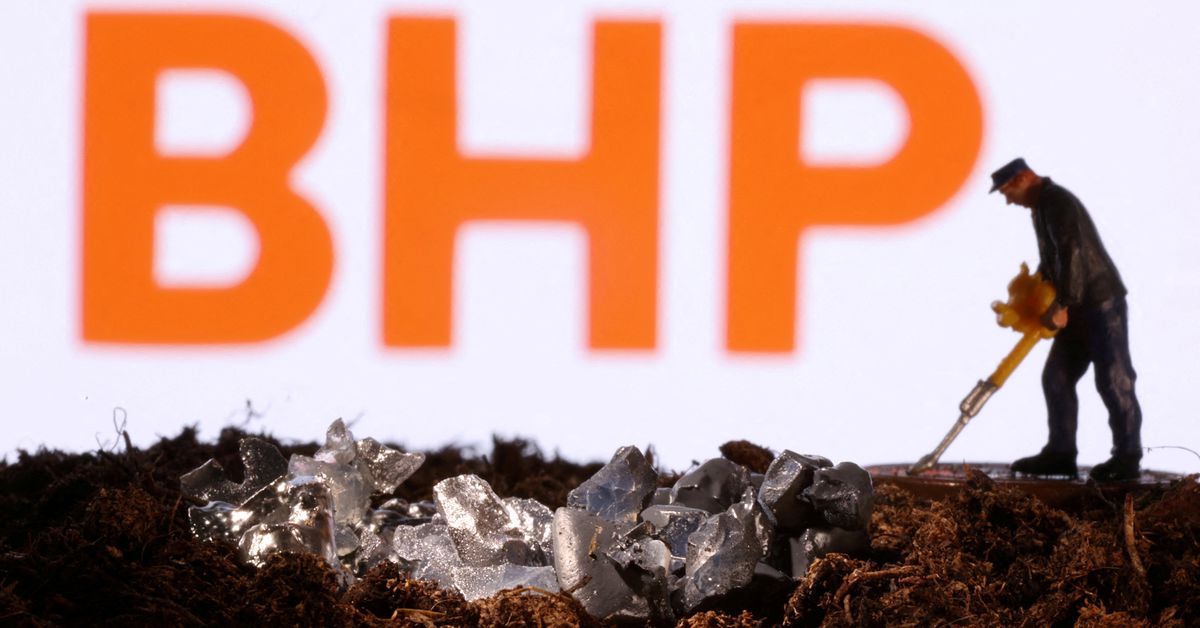 A small toy figurine and a mineral imitation are seen in front of the BHP logo in this illustration taken November 19, 2021. REUTERS/Dado Ruvic/Illustration/File Photo

LONDON, Feb 3 (Reuters) – Big miners, under pressure to increase their exposure to the minerals needed for the electric vehicle revolution, have so far opted for the cautious approach of joint ventures with smaller explorers rather than buying them purely and simply.

Shareholders will be watching quarterly results and statements from this month’s earnings season for news on battery metals such as copper, nickel, cobalt and lithium, used in batteries and renewable energy.

But miners will also want to retain the loyalty of shareholders they have attracted with dividends and buybacks in a high-risk sector that remembers reckless spending in previous commodity booms followed by busts.

Joint ventures, rather than outright acquisitions, have the advantage of spreading the risks associated with complex minerals that may not provide the margins of traditional bulk commodities.

As the trend gathered pace, the world’s largest listed BHP Group (BHP.AX), said this month that it had spent $40 million to advance a nickel project in Tanzania through from UK-based private developer Kabanga Nickel. The agreement also marks its return to Africa. Read more

In recent years, the world’s second-largest miner Rio Tinto (RIO.AX), (RIO.L) has explored for copper on the licenses of the Canadian-listed junior Midnight Sun (MMA.V) in Zambia as part of a a joint venture agreement and Anglo American (AAL.L) is being discussed with Zambian junior Arc Minerals (ARCMA.L) to chase copper.

“We expect diversified miners to enter new geographies in 2022 through the acquisition of early-stage projects,” said James Whiteside, research director at consultancy WoodMac.

But the consultancy predicts that major acquisitions this year will remain limited by a reluctance to buy at high commodity prices, which will leave investment growth in metals and mining at multi-year lows.

BHP’s exploration budget for the first half of this year is just $80 million.

This could be a problem in securing enough battery minerals to meet the expected increase in demand.

In venture capital deals, the larger miners help provide the equipment and labor skills, while the assets are mostly managed by the smaller exploration company.

“The problem is you need additional supply and… it will take more than mergers and acquisitions,” said Richard Marwood, senior fund manager at Royal London Asset Management.

Bank of America head of metals research Michael Widmer also said investment in battery metals markets by major miners will not compete with the spending and profits of established markets such as coal ore. iron, where high margins are much easier to achieve.

“The reality is that for big mining companies, investing in small miners doesn’t move the needle much, but it’s good to show they’re in battery metals,” he said. he declares.