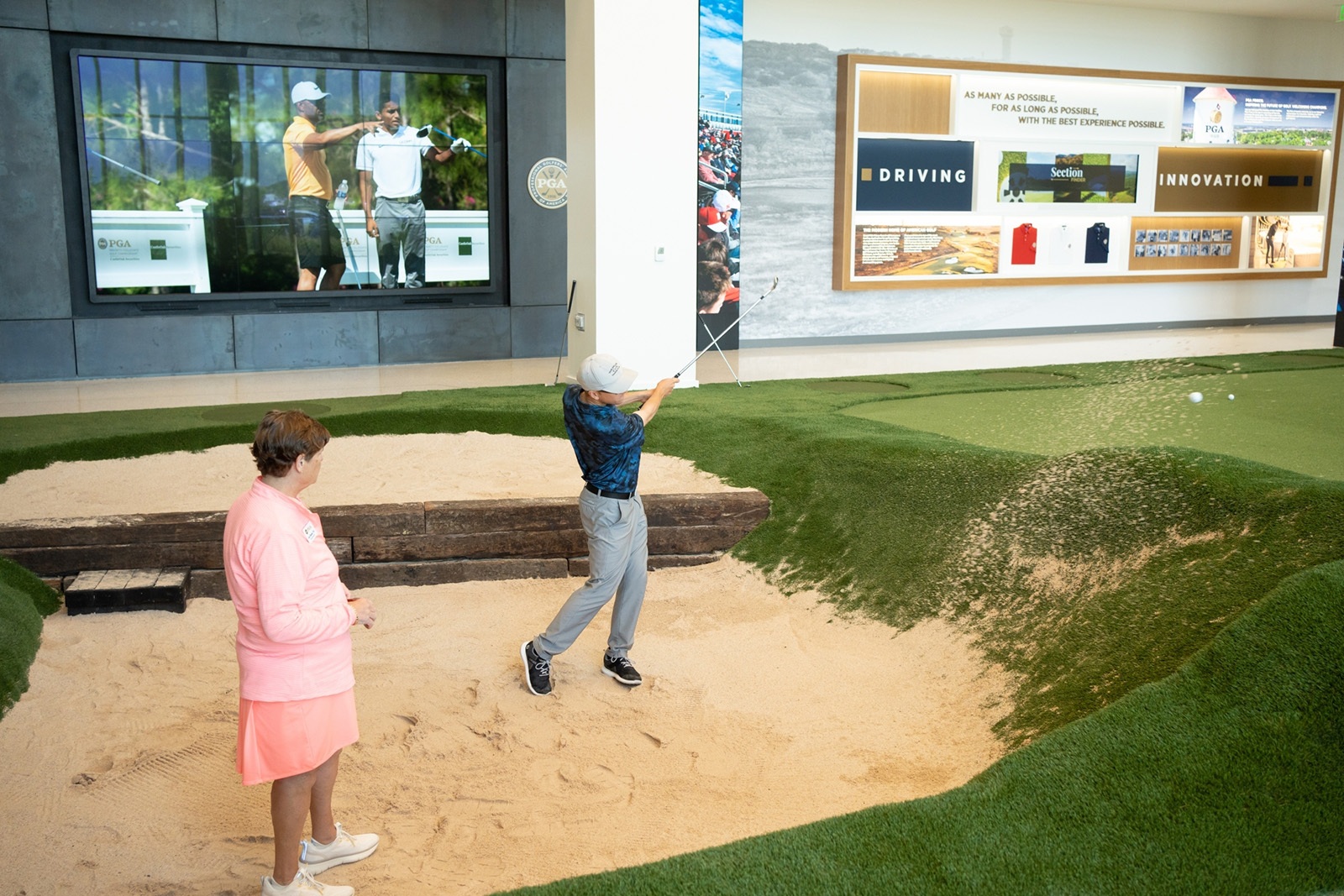 The development team behind the new PGA of America headquarters has transformed 30 acres of former cattle ranches into the ultimate office environment for golfers with opportunities to practice their swing just yards away.

The PGA of America, one of the world’s largest sports industry groups, officially opened the doors of its new $33.5 million headquarters in Dallas-Fort Worth this week. The new center is one component of a larger $550 million, 600-acre mixed-use development that includes two 18-hole championship golf courses designed by Gil Hanse and Beau Welling, a clubhouse, a 30-acre practice facility, a performance center, a 510-room Omni PGA Frisco Resort slated to open next year, and a golf-centric indoor and outdoor entertainment area.

“Welcome to our field of dreams,” PGA of America CEO Seth Waugh told hundreds of attendees at the grand unveiling event this week. “Build it and they will come. In this case, it’s 500 of our closest friends and in the future we will ensure that our 28,000 PGA professionals enjoy this ground and all future players. “

PGA’s modern four-story headquarters has been designed to maximize views of the rolling golf courses that embrace the landscape, bringing the outdoors into every part of the building’s workspace with floor-to-ceiling windows and terraces overlooking in the field. Once visitors enter the building and pass the main lobby, they are greeted by an open staircase that proclaims “I am golf” in the middle of two wings on the ground floor – one for education and one for dissemination and support.

The building’s terrazzo floors even feature the design of a small-scale golf course that can be played via a mobile app.

The educational wing features a chipping area, putting area, and indoor and outdoor practice bays with instructional technology designed to measure all elements of a golf swing. It also includes a huge sand-filled indoor bunker and has convenient practice areas for all PGA members working across the United States. The broadcast room includes a full green room for people waiting to go on air, as well as an event space that doubles as an employee lounge overlooking a small garden.

The upper floors of the building have open plan workstations for 150 employees with views of the golf courses. The industrial group’s executive offices are located on the second and third levels of the building with views leading to the teaching and broadcast rooms on the ground floor. Nearly 3,000 square feet are elevated above workstations, dedicated to socializing and a so-called stress-free space for employees.

Each floor has several large and small conference rooms, as well as less formal spaces. The event space on the top floor of the building offers the most spectacular views of the courses, complete with an event prep kitchen. The building also has a fitness center.

The unveiling of the new headquarters comes after nearly four years of development — including a construction delay due to the pandemic. But the pandemic has also brought good news for the socially distanced outdoor sport with a resurgence in popularity after declining in recent years. Golf’s popularity has seen a resurgence during the pandemic with a net gain of more than 800,000 golfers in the past two years, according to the National Golf Foundation, a sports advocacy group. This equals the population of Seattle. In 2021, there were 25.1 Americans playing at a golf course, a net increase of about 300,000 golfers after a surge in 2020.

“There are few things that bring people together in this world like the golf industry,” said PGA President Jim Richerson. “Golf can bring people from business, sports and golf together in a unique way.”

PGA of America announced in 2018 plans to move its longtime headquarters from Palm Beach Gardens, a city known for its golf courses and gated communities, to the big spaces from Frisco. PGA of America still maintains an office at its former headquarters in 100 Champions Avenue in Palm Beach Gardens, but owns some of the office space listed on the market, according to CoStar data. The trade group did not immediately respond to questions about the future of the Florida property.

The group has secured deals for more than $160 million in economic incentives from various Texas government entities for relocation, including $1.5 million to create 150 jobs from the Texas Enterprise Fund, which provides “shutdown” grants. transaction” when the Lone Star State competes with other states for businesses to grow. Commercial development in Frisco, which has a population of nearly 211,000, only began about eight years ago when the Dallas Cowboys began building their headquarters, practice stadium and mixed-use development. known as The Star in Frisco.

The new campus was a way for the business group to align itself with “world-class partners in a world-class location” in a “unique opportunity to create the Silicon Valley of golf” from a business perspective, said said PGA CEO Waugh, who has held the position since September 2018 and is the former CEO of Deutsche Bank Americas. The industry group plans to host several major PGA Championship tournaments at PGA Frisco, which is expected to become a destination for golfers of all skill levels, Waugh said.

One such partner is Omni Resorts & Hotels, part of TRT Holdings, for the Omni PGA Frisco Resort which is being built adjacent to the new PGA headquarters. The 501-room resort that includes a 127,000-square-foot conference center paved the way in May 2021 after more than a year of delay due to the pandemic.

The resort includes both designer golf courses as well as a lighted 10-hole short course, a 2-acre putting green and an indoor sports bar equipped with Topgolf Swing Suite technology and virtual games. The hotel and golf courses are expected to open to the public next spring, officials said.

Construction of the PGA headquarters came on time and within the nonprofit industry group’s $33.5 million budget, said Granger Hassman, vice president of pre-construction and estimating. for Adolfson & Peterson, the general contractor for the project.

“Any project of this nature, there is always the financial responsibility of being very fiscally responsible,” Hassman told CoStar News. “They wanted to demonstrate that they were very good partners for their members and the community.”

The building’s design was unaffected by escalating material costs and supply chain delays like some other major developments in the United States, but did face weather challenges, Hassman said. , who enjoys playing golf in his spare time but is reluctant to share his handicap.

“I like to think of myself as a golfer who’s been around the game, and it was a really popular project to work on and got a lot of people’s attention,” Hassman added. “It’s everybody’s second favorite sport.”

To stay within PGA’s budget, the team cut costs in some places to make room for high-end design features such as the building’s steel frame, Hassman said. The architecturally exposed structural steel envelops the building, blending with the stone, plaster, metal panels and glass, Hassman said.

The headquarters will initially accommodate 120 employees and PGA announces about 22 full-time open jobs in Frisco, according to its website. While the building is expected to serve as a place for the PGA to recruit the best employees and showcase the future of golf, the headquarters also pays homage to the organization’s past with interactive videos, displays and trophy showcases.

The PGA of America developed the campus through a public-private partnership with the City of Frisco, the Frisco Economic Development Corp. and the Frisco Independent School District. Page was the architect of the project. Adolfson & Peterson was the general contractor. Cushman & Wakefield was the project manager.

The Future of American Agriculture: Broadband Solutions for the Farm Office, Field,…