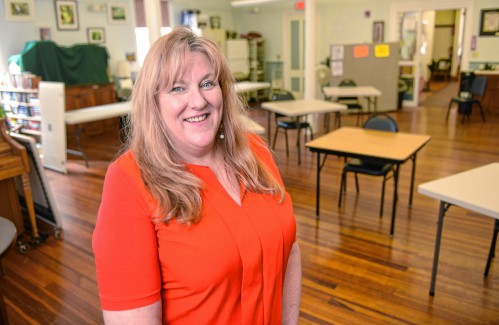 SHELBURNE FALLS — Julianne “Juli” Moreno, the center’s new senior manager, distributes take-out meals and gets to know those who frequent the center, but she’s no stranger to the area.

Moreno, 59, started this week after serving as director of adult services for about three years at The United Arc. She replaced former director Amanda Joao, who got her master’s degree and took a job elsewhere.

After graduating from Greenfield High School, the Greenfield native attended Texas Women’s University, where she earned a degree in expressive therapy. She then worked in a Houston jail before returning to Franklin County.

After a few years working at the Center for Human Development, she went back to school at the University of Phoenix and earned her master’s degree in organizational management, choosing this path because she “wanted to influence politics in a bigger way.” .

Moreno, who is married and has a 26-year-old son, said she has close family. Her passion for improving care for the elderly began with caring for her mother, allowing her to stay at home despite illness and death.

Moreno’s interest grew after returning to Massachusetts and running a day program in Holyoke. When that contract ended, she started working for Hawthorne Services, where manager James Callahan, she said, “inspired me.”

“We did a project with UMass called ‘LIFE’, working to teach letter carriers, police – guardians of elders – what to look out for and we worked on a presentation on suicide because the stats are high for men over 70 who commit suicide,” Moreno says.

His commitment was solidified by working with the Center for Human Development.

“Families would come out on the streets and ask me questions,” she said. “It was amazing to me that people didn’t know about the resources available. Sometimes I couldn’t help them, but I always knew where to send them.

Over time, Moreno said she has gained “tremendous respect” for elders.

“Here they are, near the twilight of life, and why are things made more difficult for them?” she says.

When she saw the opening at the Senior Center, Moreno said she “felt in me ‘this is my niche’. I believe so much in making life better for seniors. They laid the groundwork of this whole world.

Moreno has attended several town hall discussions about the future of the center, where discussion continues on forming a West County seniors’ service district between Shelburne, Buckland and Ashfield.

“I understand the concept,” she noted. “If we remain a consortium or if there is a district, you can get more resources. I’m all about resources.

Moreno is keen to broaden the public’s perception of what a center for the elderly can be.

“How can we partner with people and connect more, and who can we do it with? The other piece is marketing – trying to open up people’s perception of what a senior center might be because it is the community, after all.

One area of ​​interest for Moreno is cyber-justice. She noted that during the pandemic, a “lack of support through existing technology” has been highlighted.

“If an older person doesn’t have a cell phone, for example, they miss some things,” she said, adding that the center has been fortunate to benefit from donations of time, equipment, services and instructions to help remedy this situation. .

“It’s a great thing to teach people how technology can improve their lives,” Moreno continued, mentioning a Zoom session with a representative from Joshua Tree National Park in Palm Desert that attendees found fascinating.

For Moreno, “making those connections and seeing new things” is important. She’s also interested in people seeing that the senior center is theirs and “getting more people involved in creating programs.”

As for the center’s physical home, still under debate, “it would be nice to have a better nest,” Moreno said.

The current home of the Masonic Building on Main Street, with the use of a single floor (more have been offered), is a tight squeeze given the burgeoning elderly population of Ashfield, Buckland and Shelburne.

“You stop paying attention to certain things because you just work with them, but that’s the nest,” Moreno said of the centre. “It’s a place where you should feel safe and comfortable with the other people involved. And it must involve the full participation of all seniors.

She recently learned that there are over 700 people in Ashfield alone who are over 60.

“What are we doing to capture these people? This is the direction to go,” she said.

Moreno hopes to stay at the center until his retirement.

“It really felt like a gift, a position that I earned,” she said. “It (takes into account) everything I’ve learned and am good at.”

She added that she is “trying to be patient” with herself as she learns about the operations of the Senior Center and its members.

“You can’t really influence change without building relationships and partnerships,” she said, “so I have to start there and then hopefully get out the door and make a difference.”