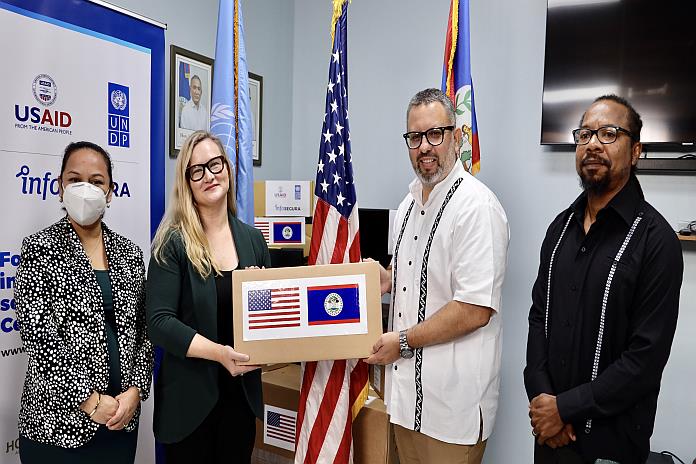 BELMOPAN, Belize – To support Belize’s efforts to improve its national security and enhance inter-agency crime data sharing, the U.S. Embassy today chaired a donation that included a high-powered Dell server and three workstations. Dell with high quality monitors. This equipment will improve data management by the Belize Police Service and the National Forensic Service. The aim is to strengthen inter-agency data sharing, through the Belize Crime Observatory – the national repository of crime data and information – so that criminal investigations can be fast, thorough and ensure justice.

At the award ceremony, Minister of Interior and New Growth Industries, Kareem Musa, received US$35,078 in information and communication technology (ICT) equipment from the political-economic leader from the representative of the United States Embassy, ​​Andie De Arment. The implementing partner, the United Nations Development Program (UNDP), was represented by Marilyn Pinelo-Lee, Program Officer in Belize.

The American people funded this project through the United States Agency for International Development (USAID) “Evidence-Based Information Management for Citizen Security in Central America and the Dominican Republic” project. ; the implementing partner UNDP Belize purchased the equipment. This collaborative effort, also known as the regional InfoSegura project, is an integral part of broader US efforts to improve citizen safety in the region. InfoSegura responds to the critical needs outlined in the BCO’s Strategic Action Plan (2020-2023), which envisions the establishment of a crime intelligence architecture by 2023.

“We know that transparent communication and an established platform for intelligence sharing improves law enforcement investigations and increases the likelihood of prosecutions, thereby ensuring justice for citizens. The ICT equipment donated to the Government of Belize today are new resources that will allow multiple agencies to access accurate, real-time information to follow the arc of justice, from investigation to prosecution.

“The Ministry of Interior and New Growth Industries highly values ​​the relationship that has been nurtured over the years with UNDP and USAID, through the regional InfoSegura project. This donation of ICT equipment builds on previous investments made by the US government to support rule of law infrastructure among multiple stakeholders. We are confident that these agencies will make the best possible use of the material provided, to improve the timely provision of quality citizen security data and information to the Belize Crime Observatory and to advance the work collaborative towards the establishment of Belize’s crime intelligence architecture by 2023. , for the use of information in the implementation of evidence-based public policies.

“The United Nations Development Program, through the USAID-funded InfoSegura project, has been supporting the BCO and its key partner agencies since May 2014 through the creation, strengthening and institutionalization of the BCO, deepening the implementation joint implementation of gender-responsive tools, evidence-based policy and decision-making and support for a national security strategy Since its inception, the project has invested approximately USD 796,000 in Belize Donations of ICT equipment respond to the urgent needs outlined in the BCO’s Strategic Action Plan (2020-2023) and help lay the foundation for a sophisticated ICT framework and the realization of Belize’s multi-agency crime intelligence architecture.

The regional InfoSegura project continues to support interventions and policies that aim to strengthen crime investigation methodologies so that justice can be strong, fast and accurate through data-driven processes. The project is funded by the United States and implemented in Belize by UNDP in partnership with the Ministry of the Interior and New Growth Industries, through the Belize Crime Observatory.


Legal disclaimer: MENAFN provides the information “as is” without warranty of any kind. We assume no responsibility for the accuracy, content, images, videos, licensing, completeness, legality or reliability of any information in this article. If you have any complaints or copyright issues related to this article, please contact the provider above.