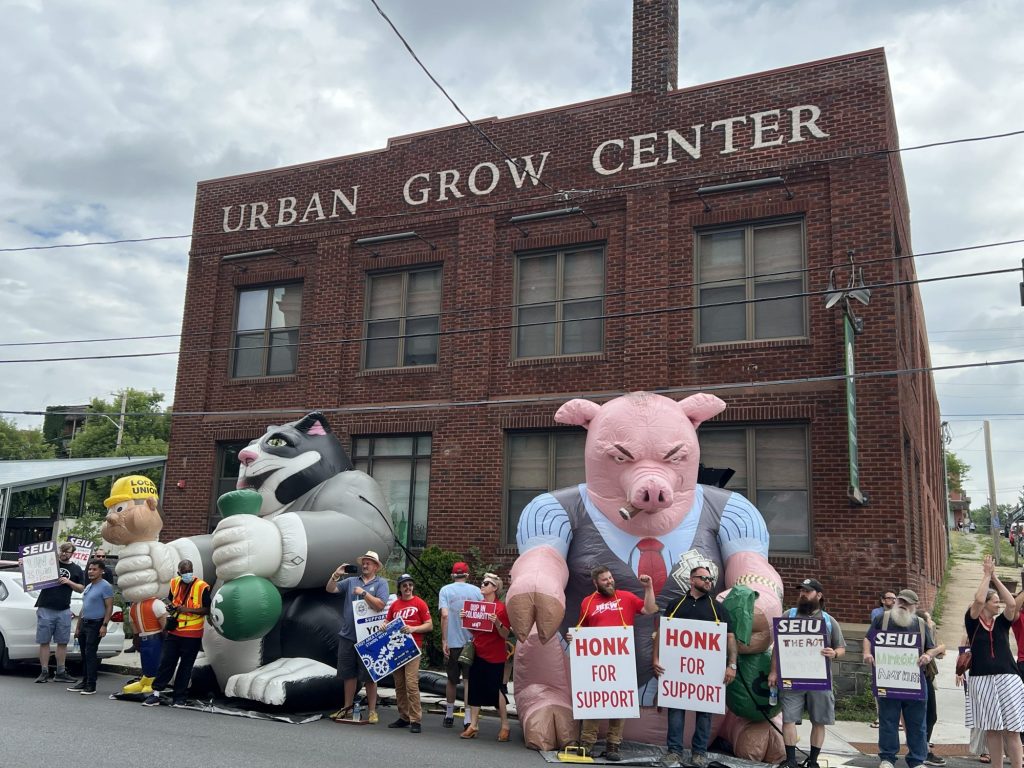 TROY, NY – Outside the Capital Roots Urban Growth Center, members of Capital Roots United/SEIU, Capital Region Federation of Labor, Troy Area Labor Council and others Community supporters and allies gathered on Friday afternoon to rally and speak out against the leadership retaliation. .

The wrangling between employees and management began with weeks of delays by Capital Roots in granting union recognition with SEIU Local 200United. Workers have expressed frustration at what they call a pattern of retaliation from Capital Roots CEO Amy Klein and her management team. Union supporters also noted that since early July they have been unfairly disciplined and even fired.

“Their union was voluntarily recognized a month ago and we had hoped that we would be able to reach a recognition agreement and go to the bargaining table, but over the past month Amy and the administrators have surrendered to a series of retaliation and just dug their heels in,” Collins remarked.

“The thing that crossed the line, that forced our hand to do this, was that they fired Cody Bloomfield, who was the volunteer coordinator, who has tons of connections to outside groups. It was just an incredibly egregious act of retaliation and we had to take public action,” Collins explained.

Bloomfield believed she was being targeted for being a strong supporter of the organizing effort. She discussed what led to her firing from Capital Roots.

“I sometimes step in for programs to help me, but I’ve had people come in all morning until noon for a sending project that we’re trying to complete, including an ARC group that I work with working closely on the stamping and sealing the project and they were coming in and i was excited to work with them so i said no i can’t get out today but there are some employees who can. I was told I was insubordinate and then asked to leave and wanted to have a conversation about it,” Bloomfield explained.

“If I am asked to leave the premises at 10 a.m. when I work from 8 a.m. to 4 p.m., it must be disciplinary, let’s talk about it, I would like my union representative to be present. I was told no we won’t have a conversation nor will I give you a reason there was no reason given for asking me to leave beyond CEO Amy Klein just wanted that I leave the place. So, she said, now you’re a trespasser, so I’m going to call the police and I’m going to have you arrested and she said that three times as she stood in front of me at my desk,” Blomfield continued.

“I was taken out by my union rep, who introduced himself and made sure I got out of the building safely. I stayed home for the rest of Tuesday, towards the end of the work day on Wednesday I received an email with my termination letter. So there was never a conversation about discipline, I was just emailed saying I was fired. I’ve been a great employee at Capital Roots. I have fantastic reviews, perfect ratings on my reviews, rave recommendations,” Bloomfield added on the event series.

She also indicated that she would like to return to work at Capital Roots and continue to support her colleagues.

“If that’s not possible, then I’m here on behalf of the colleagues who are still here, who still come to work every day in a hostile environment because they want to see these programs delivered to our community and our constituents” , Bloomfield continued.

“People are absolutely frustrated inside the building to see me let go. People who have worked at Capital Roots before say they are sadly not surprised that actions like this have been taken,” Bloomfield added on worker morale.

Capital Roots’ board also released a statement in response to the rally.

“Capital Roots remains committed to setting an example of a fair and equitable workplace for our valued staff. When we voluntarily acknowledged staff efforts to unionize last month, we did so with the understanding and expectation that the nonprofit’s lawyer and the union would quickly begin to negotiate in good faith, and in parallel , both parties would continue to legally carry out their duties of ensuring the essential day-to-day operations of Capital Roots,” the statement read.

“At this time, no negotiation agreement has been reached, and it is premature to elaborate on the specifics, as negotiations are expected to begin in the fall,” the statement continued.

“The Board’s decision to voluntarily recognize a union of Capital Roots employees remains the policy and intent of the Board and management of Capital Roots. Unfortunately, we are aware of numerous factually inaccurate and defamatory allegations made against CEO Amy Klein and her management team by some union supporters. We categorically reject them. Management did not act unlawfully and its actions, taken to support the management of the organization in forming this new relationship, were guided by the principles of the organization, our rules of workplace conduct and the law. They have nevertheless been manipulated and twisted into false claims of unfair practices and retaliation. These claims are not true,” the statement explained.

“We look forward to continuing the conversation with the union organizers and fully support the nonprofit’s CEO, Amy Klein, who has been with the organization for twenty-five years and has demonstrated leadership and of optimal compassion not only for staff, but also for the people the organization serves. We will continue to maintain a positive work environment for all Capital Roots volunteers and staff,” the statement concluded.

Slurry spreading research to be shared at Carmarthenshire Open Day